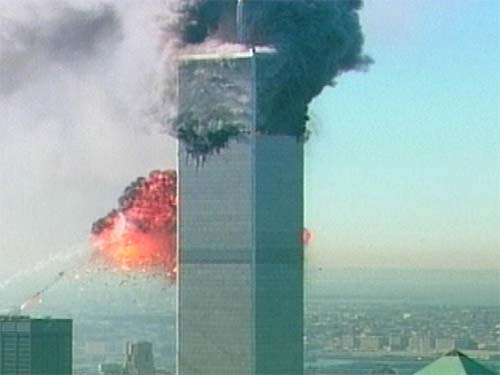 (This is an amended Mind Matter that was first published in August, 1998.)

The World Trade Center towers have now joined the U.S.S. Cole, the embassies in Nairobi and Dar es Salaam and the Beirut Marine barracks as terrorists' targets. Even while decrying terrorism, I find no irrationality in terrorists' actions; indeed, the logic is terribly clear.

Terrorism is the violence of the weak; war is the violence of the strong. Each is given due honor and each is condemned, depending on which group one agrees with.  One might decry the carnage that results from a terrorist attack, however, if it is one's enemy that is attacked, there can still be some pleasure tucked away in the corner of one's mind.

Violence so very quickly moves our languid blood.  Terrorism and war have an instantaneous binding power--to rally supporters. We see such unity and support overcoming fractiousness as Congress gives vast powers to the President.

We denounce the breakdown of law and order. But, "law and order" is the slogan of those in control--law being the rule of the powerful and order being that which is imposed by rulers. For example, Israel, as the powerful nation in the Middle East, is able to define law and order and thus label Palestinians as terrorists, whereas Israel's own violent actions in the name of law and order are a right and reasonable response.

Injustice is the seedbed of anger; unrecognized and sustained injustice provokes violence. Think of the anger generated by being cut off on the freeway or having one's child not get her or his due in school. Unaddressed or sustained, such incidences can provoke inner rage and even a violent outburst. Thus, we have 'road rage' or a parent physically attacking a coach. Our country was founded in terrorist's acts (in the view of the British). The rebellious colonists raged against twenty-nine injustices listed in the Declaration of Independence. The Israelites under Joshua used terror as they "killed everyone, men and women, young and old ... They even killed every cow, sheep, and donkey" in Jericho. Then, they went to the next town, Ai, and did the same. Did knees quake in the surrounding towns as the word burst forth? Of course.

Terrorism gives life to those engaged in it. The British writer G. K. Chesterton pointed out: "When a man has found something which he prefers to life, he then for the first time begins to live." Jesus said much the same thing: "Anyone who would lose his life for my sake will find it." To find a purpose beyond one's own ego--like Nathan Hale ("I only regret that I have but one life to lose for my country,") or Dietrich Bonhoeffer (a German minister who participated in the attempt to kill Hitler) or a suicide terrorist--allows a person to come fully alive. We honor those who give their lives for a larger cause. Terrorists do what our 'heroes' do but for what we consider the wrong reason.

We condemn those who give their lives for a cause that results in the pain and death of innocents. But, terrible also are lives wasted with narrow vision. Mull over with me the words of two other British writers--William Butler Yeats and George Bernard Shaw.

Things fall apart; the center cannot hold;
Mere anarchy is loosed upon the world,
The blood-dimmed tide is loosed, and everywhere
The ceremony of innocence is drowned;
The best lack all conviction, while the worst
Are full of passionate intensity.

This is the true joy in life, the being used for a purpose recognized by yourself as a mighty one; the being thoroughly worn out before you are thrown on the scrap heap; the being a force of nature instead of a feverish selfish little clod of ailments and grievances complaining that the world will not devote itself to making you happy.

Truly terrible are those whose violent actions visit random death on innocents. It is beyond my ability to mentally encompass and comprehend what my eyes have seen of the collapsing towers of the World Trade Center.

We must clearly and rationally find a way to minimize or stop those who carry out such acts. But, in doing so, we should not make the mistake of denying their clarity and rationality, or their humanity.