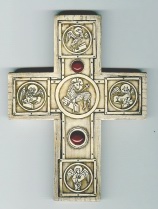 A tenth-century German cross with the symbols of the four Gospels surrounding the Lamb of God:
Matthew, as a man; Mark as a lion; Luke as an ox; and John as an eagle.

Viktor Frankl, a Viennese psychiatrist and Nazi death camp survivor, developed a form of therapy known as 'logotherapy.' He observed that the probability of camp survival increased significantly if a person had a purpose for life. (Frankl's logotherapy stood in contrast to the prevailing therapy of stirring up a client's past to deal with the malaise.)

Actually, we know the truth of Frankl's observation from our own experiences. When we are in love, immersed in work, or captured by a dream or a religious commitment, we find that energy flows, days come alive, and the future entices us.

I transmuted Frankl's logotherapy into the belief that mental models could draw together discordant elements that vex mind and spirit, and out of that could come an enlivening and empowering understanding. This happened, for me, when I formed the concept of the Bible as 'Meeting Place.'

We go to the Bible for inspiration, knowledge, moral precepts, proof texts, authority and history. There, we are told, we find full nourishment. A toxin, though, is also transmitted:  biblical literalism--a seven-day creation, a bush that burns and is not consumed, a command to stone to death one's disobedient child, and an axe head floating, and a person walking, on water. To honor the Bible and to live with such discrepancies, people will hold the honor and the discrepancies in watertight compartments. Alternatively, they shrug and give up on the Bible entirely.

Understanding the Bible as 'meeting place' is transforming. Instead of the Bible being that to which I go for the answer, the Bible is the place where I bring my own questions, experiences and convictions to converse with those whose questions, experiences and convictions are recorded there. I am able to share my difficulty in finding the appropriate language to talk about the profound experiences of my life with Moses who found his own imaginative way by speaking about a burning bush. I bring my frustration with contemporary worship life and converse with Micah who, after lashing out at the worship of his day, said, "What does the Lord require of you but to do justice, love mercy and to walk humbly with your God." (Moses and Micah, not living in the this century, have something to learn from me as well as I from them--at least that takes place in my active imagination.)

Actually, I believe the compilers of the Bible wanted us to view scripture in this way. They recorded two versions of creation, two views of the conquest of Palestine, and said that the story of Jesus was so rich and so vital that it could only be told in the interactive conversation among four writers--Matthew, Mark, Luke and John (even though each tells the story with reference to different, and sometimes conflicting, sayings and events).

Provocative is a good word to describe this conversation.