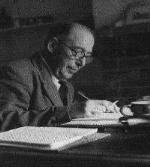 
This would be my tenth viewing of the movie The Breakfast Club, appearing unexpectedly as it did on late night TV. I had repeatedly used it at confirmation retreats and, although I could repeat much of the dialogue verbatim, I decided to watch it again, this time without ninth-graders looking over my shoulder.

Five high school students, from different social, economic and intellectual worlds, gather for a Saturday detention. What overcomes their palatable distaste of each other, and eventually binds them together, is their antipathy towards adults-first the scowling, finger-shaking teacher confined with them and then their parents, about whom they have little good to say. Their view of the adults in their lives is bleak and pained.

I was reminded of C. S. Lewis' explication of the Greek word, storge, familial love. Lewis notes that he has "been far more impressed by the bad manners of parents to children than by those of children to parent." He writes of parents treating their children with "an incivility which, offered to any other young person, would simply have terminated the acquaintance." Parents ridicule things their children take seriously and make insulting references about their friends. They impose ruthless interruptions and are dogmatic on matters children understand and their parents don't. With each of Lewis' comments, I cringe in recognition of others and myself. (As the youth in the movie talk, they vow to treat their own children differently, yet admit that they, too, will most likely fall into the 'parent trap.')

Family life, as loving as we would assume it to be, frequently exhibits just the opposite characteristics: often, we are less courteous, less tolerant, less verbally appreciative and less forgiving than we are of friends, business acquaintances and even strangers. How could it be, I wonder, that a child could be using drugs and parents not pick up the numerous telltale signs? Or, how is it possible, I wonder, that one spouse can announce to the other that he or she is leaving and that announcement comes as a surprise? I think that much family life consists of sliding by each other. Perhaps such close association leads us to assume that we already know the other person's thoughts, motives and actions. Perhaps we are just fearful of letting others get too close to us and knowing us all too well.

The family is where one can remove the mask of conviviality so essential for getting along with others. But taking off that mask in the family does not mean that attention, respect and love are to be discarded as well. An Oxford professor of literature and a mid-80's movie remind me of that.