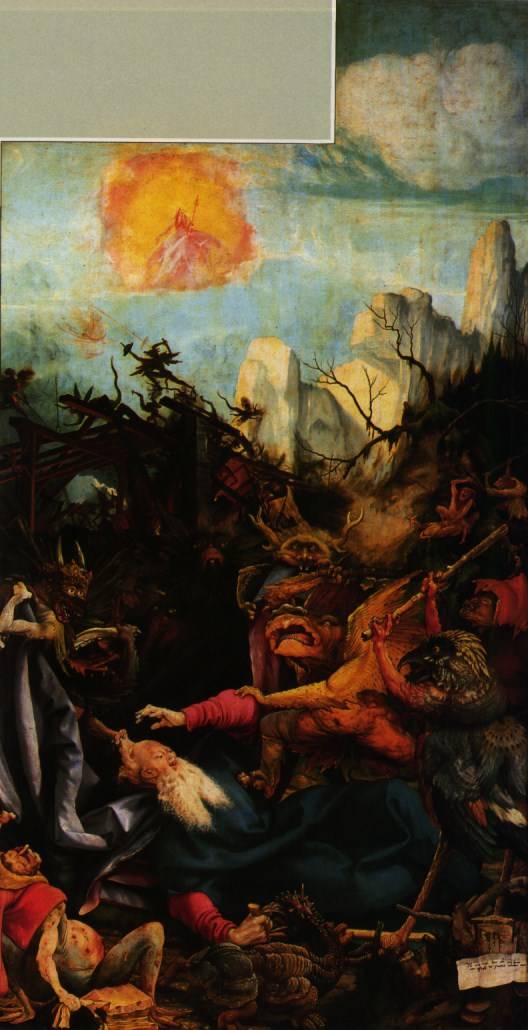 Matthias Gruenewald, The Temptation of St. Anthony
from the Isenheim Altar, 1512 - 1516

It happened so quickly. One moment the conversation was benign, then sharp words were spoken and the previous lightheartedness was gone. Another person and I had violated the cardinal rule of sociability: don't talk about religion or politics. The subject was broached, and I discovered my conversation partner was a fundamentalist (my word, not hers). My view that the Bible contained, in places, a less than flattering portrait of God was flash-point unacceptable.

To illustrate my assertion, I brought up one absolutely horrendous story.

The ancient Israelites, moving into the 'promised land' under Joshua (and after the death of Moses), first encountered Jericho. When "Joshua fit the battle of Jericho," ordered by God, they  "killed everyone, men and women, young and old,  every cow, sheep, and donkey, they set fire to Jericho and everything in it." This scorched-earth policy was, I believe, designed to strike fear into the inhabitants of the land. One Israelite didn't follow orders and kept a robe and some gold. He and his family were stoned to death; their bodies, what he had stolen, and all his possessions were burned and then covered with a big pile of rocks. With that, we read, the Lord stopped being angry at Israel, and with the next town, Ai, they did it right. Joshua kept his sword pointed at the city until "every last one of Ai's twelve thousand people was dead."

How do we square that ethnic cleansing with the later statement that "God is love?" That discrepancy could have led to an engaging discussion of our understanding of how the Bible portrays God or an examination of the nature of the Bible itself. Unfortunately, her adherence to a belief in the literalness of the Bible squelched both conversation and sense.

The same issue has come up in Germany. Having their appeal to ban the Bible denied, by the responsible government ministry, as being too violent for children, a pair of lawyers went to court. They stated that the Bible "preaches genocide, racism, enmity towards Jews, gruesome executions for adulterers and homosexuals, the murder of one's own children and many other perversities" and wanted the Bible banned until the offending passages could be removed. The court dismissed the case on the basis that the constitution prevents the government from interfering in religious matters.

Without the ubiquitous legal system to help us, how are we to affirm the special quality of the Bible to inform and inspire and, at the same time, recognize its pettiness and viciousness? How do we listen to the minister intone, "This is the Word of God" after a scripture reading portrays a petulant, narrow or angry God?

Diets, books and weather are my new-found social companions.