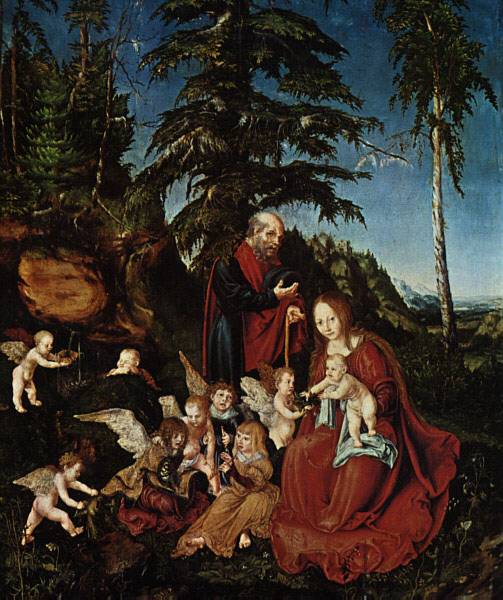 The Rest on the Flight to Egypt
by Lukas Cranach, the Elder, 1504

Church and state are not separated in Matthew's account. The despot Herod was immediately alert when he heard the Magi were looking for a messiah to be born. Messiahs, in the popular mind, were political revolutionaries, and Herod had already suppressed other uprisings.  When the Magi did not return to Jerusalem, Herod sent troops to slaughter all the male children two years and younger around Bethlehem. That slaughter is part of our nativity story.

Like today's hundreds of thousands, even millions, fleeing their countries to avoid death and clamoring for refuge in foreign lands, Mary, Joseph and the babe fled to Egypt. That is part of our nativity story.

Although shepherds make a regular appearance in our retelling of the Christmas story, an awareness of their low social status is absent. Instead of the semi-romantic figures we have made of them, shepherds could be compared to today's street people, the lowest of society's low. We have lost the sense of scandal associated with the angelic announcement to the shepherds. Yet, that is part of our nativity story.

Certainly, first century folk knew that it required two to conceive, and a virginal conception would receive the same incredulity then as now. Such skepticism is part of our nativity story.

The good news, "joy to all people," is that in the midst of:

the political machinations of Herod;
the slaughter of children;
families on the road as refugees;
a young girl 'in trouble;'
(and the myriad other things that happen in the world);

there is good news of a great joy.