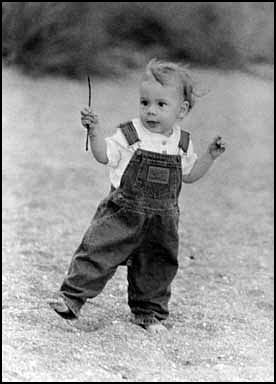 It's Time to Grow Up

llinois Representative Henry Hyde, on being confronted with a five-year extra-marital affair he had thirty years earlier, when he was in his early 40s, dismissed its importance by saying, "The statute of limitations has long since  passed on my youthful indiscretion." I was stunned--youthful? Hyde's comment came to mind when, more recently, a person, in speaking about the questionable performance of another, stated, "He will grow into the job." I responded, "But, he is in his 50s, and he's a professional." Then, the person offered another excuse . (Into my mind popped the image of Thomas Jefferson who, in mere infancy, at the age of thirty-three, penned the Declaration of Independence.)

Being defensive and avoiding responsibility is  automatic with us humans, even rooted in that ancient myth of the Garden of Eden. On being confronted with their disobedience, Adam blames Eve and then Eve blames the snake. In the story God will have none of that, and all three--Adam, Eve and the snake--suffer consequences.

This natural human tendency is now built into our social and political structures. We have avoidance of responsibility in the repetitive, "On the advice of counsel, I cannot comment on that" and the well-developed spin machines of modern politics. Added to this are the fields of psychology and sociology that, while in giving us greater understanding of our inner and outer environments, also make it easier to explain away bad behavior and to do it with such important-sounding words.

The excuse-making that is natural for ourselves we also extend to others. The eighteenth/nineteenth century French writer, Madame de Staël, put it well, "we forgive whatever we really understand." But, her descendant, the Duke de Broglie, judiciously penned the paradox: "Beware of too much explaining, lest we end by too much excusing."

We are immersed in far too much explaining and too much excusing.. I see this happening in courts where horrendous behavior is now 'understood' and excused, where  the seemingly endless stream of talk shows give people the opportunity to tell stories of their abysmal behavior--real or enhanced-- to a quickly forgiving audience, and where individuals, even in their 40s and 50s, are off-handedly excused for their immoral or unprofessional behavior.

As a corollary, I, personally, find that developing an understanding of the mixture of motives out of which human behavior arises often frustrates my clear desire for moral indignation. Greater understanding makes it easy to temper judgment and passion.

Personally, knowing how hard life can be and how easy it is to get caught in moral dilemmas, and knowing that when I point one finger at another, I have three pointing back at myself, I still think/say at times, "It's time to grow up!"