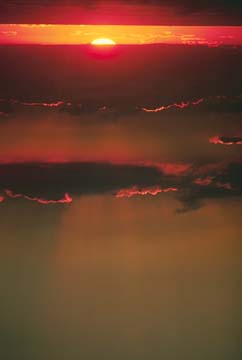 The reunion with my college roommate, a native Hawaiian whom I had not seen since 1955, was delightful. I asked him: "In living together so long, how could I have learned so little about the history of the Islands and its people?" His response was startling, and illuminating: "I don't know that back then I had that much to tell you." No such dearth of information exists today.

Paradoxically, our heightened awareness of ethnic and racial groups (and their own assertive self-awareness -- three examples being the Kurds in Turkey and the Scots and Welsh in Great Britain) accompanies the knowledge of being 'one world,' a consciousness which is captured so spectacularly by the picture of our planet from space. During a recent trip in the Pacific, I found in each area I visited newspaper headlines highlighting live political issues around the native Hawaiians, the Maori of New Zealand, and the Aborigines of Australia.

Such articles always set up an uncomfortable internal tug of war: sympathy and outrage because of past and present treatment on the one hand, and, on the other, a shrug-of-the-shoulder acceptance that this is the way the world has always worked and to expect anything else is absurd. When a powerful group moves into an area, existing inhabitants are enslaved, killed and expelled, and the existing culture is squelched (the same thing happens when a more powerful corporation takes over another). For example, how could there not be deep conflict when the more numerous and more powerful majority, who believed in private ownership of property, occupied land which had not been fenced. Of course, the fences won, and a vibrant culture went into steep decline.

A sign on an exhibit in a museum in Christchurch, New Zealand, read: "First Settlers." I find this a helpful term and one I now exclusively use to describe 'native' and 'indigenous' populations. The term recognizes the earliest occupants, while at the same time serving as a reminder what they have in common with other 'settlers' who followed them.

First Settlers live with unaddressed and unresolved pain. With the rise of awareness, we acknowledge the horrific past. I am skeptical, though, of resolving past injustices to the full satisfaction of survivors or descendents, even assuming that a majority culture would want to genuinely apologize and make redress for the past. What can ever be done to wipe out the tragic heritage of the Trail of Tears or the Middle Passage?

What is true on the cultural level is also true in our individual lives. Who, having deep wounds inflicted by family, classmates, spouse, corporation or church, has been able to completely eliminate their memory or the rapid stirring up of related emotions? Much unaddressed pain sloshes around in our lives.

In two days, I uncovered the knowledge I missed forty-five years ago. I also was able to link up with a fellow pilgrim on our common human journey.