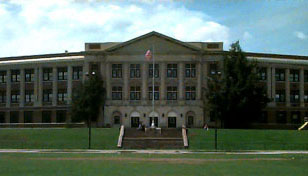 I slid down a bit in my seat and an imperceptible groan seeped out. I was watching the 1968 documentary High School. The scenes rapidly pulled me into my own high school days two decades earlier and my own days as a teacher and school administrator at the time the documentary was filmed. Responses from university students in the discussion which followed confirmed the 1990s with the same adult emphasis on compliance and conformity and the same student boredom.

A scene in which a teacher challenged a student to stand up to the crowd and show individual leadership and personal conviction was juxtaposed with that of another student who was berated for not fitting in and following the rules "that everyone else lives by." The administrator's patronizing and placating "we want to do the right thing" (conform to the rules is what was meant) joins the parent's comment to a counselor (with the daughter/student present), "I wish she was as smart as she is strong." These comments are part of the continuing verbal assault on the reason and self-esteem of students.

Reading the students' plainly visible feelings of suppressed boredom, apathy and anger required no perception, but why, I asked myself, was the adults' (teachers, administrators and parents) response so uniform over the decades?

Shoehorning so many human bodies into a relatively small space--for so many hours of the day and for so many days of the year--requires an enforced uniformity of students' habits and behavior. How many adults would want to endure (or could actually survive) the crowding in classes and in hallways, the patronizing and punitive attitude of teachers, the often sarcastic put-down by administrators day-after-day for nine months? (If you have ever felt that a teacher 'had it in for you,' you know how everything you do is viewed as disruptive or wrong). Such crowding and need for conformity can numb the spirit and be a continual irritant. Such wearing down of the spirit deadens teachers as well as students.

The obvious need for order and conformity in the classroom, hallways and activities conflicts with the teachers' genuine desire to see students learn. For little learning takes place in chaos and the opportunities for one student to assault another increases without discipline.

In the final scene in the documentary, a teacher reads a letter of appreciation from a former student and the teacher concludes with the statement, "This makes what we do worthwhile. We do have an effect on students' lives."

Yes, I survived and learned as a student and most of the students I taught and disciplined survived as well. In the midst of all the institutional and bureaucratic maze, most people do get taught.

In another twenty years, will a person looking at the movie High School see the same system in place. In my mind, the answer will be "Yes."