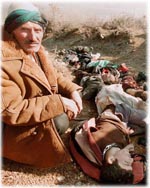 Once again we see a vast human sea-this time Kosovar refugees flooding Macedonia, Albania and Montenegro. Daily TV images alert us to the unfolding horror. Seen by itself, the ethnic cleansing of Kosovo is a human aberration. On the other hand, viewed in the context of this bloody century, it seems to be a one of the lesser occurrences. The major slaughters, based on conservative estimates, have been:

As I sit and take time to think about each number (rounded off to the nearest 100,000), my mind shuts down. It is only when I think of one solitary person after another that the numbers become tangible, and that only increases the horror. Few of the above incidents are part of our active consciousness. The recent book by Iris Chang, The Rape of Nanking: "The Forgotten Holocaust of World War II," brings one to light.

This record leads me to speak with humility about living in this age of marvelous progress. That progress has a grim side, since it allows governments more effective means to slaughter more people more efficiently.

No democratically elected government is in the above list. In light of that, we can add a corollary to Lord Acton's dictum: power kills and absolute power kills absolutely.