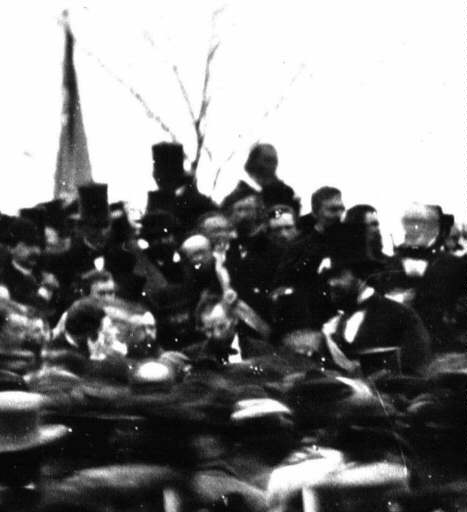 Lincoln at Gettysburg (in center of photograph).

The abortion debate settled into its familiar argumentative pattern. Well-honed points, reiterated over the past quarter century, continued to be passionately stated. Sitting back, my mind settled into a half-listening, half-reverie mode. Reverie took over on the Constitutional argument: was the 1972 Wade v. Roe Supreme Court decision legitimately derived from the Constitution or was this a case of judicial activism?

My mind transported me to similar debates concerning the Bible. How one interprets this primary document is at the heart of much controversy. Are we strictly bound to the literal words of the Bible, or does the Bible provide us with the broad principles that we apply to today's issues?

As the abortion debate faded further, the frequent argument between parents and children took its place alongside the Constitution and Bible. Parents use their own knowledge and experience as a kind of "basic document." Having learned from their own mistakes and being aware of both the dangers in society and the vulnerabilities of youth, they impose rules and restraints. Children exercise judicial activism.

Of other applications, I am not in doubt. For in these arguments, we find a foundational human issue: in what manner and to what extent is the past to determine our present and future? It is usually a tug of war, each side gaining and losing ground. Revolution or repression is the result of one gaining complete victory.

Familiar with the Spanish philosopher Santayana's line, "Those who cannot remember the past are condemned to repeat it," we are not apt to ignore the past. Yet, when Lincoln at Gettysburg speaks of this country having a "new burst of freedom," we can find our hearts quickening. We all are caught between convictions shaped out of our past and new understandings necessary to create a viable present. Individually and as a society, we are pulled both ways.

Creative ways are available for wending our way through this tug on our consciousness. A rabbi, under Orthodox attack for his 'novel' interpretation of the Scripture, wrote, "God's law is perfect. If God left a loophole, there was a reason. We are allowed to use it." Not a bad way to take the present seriously in light of the past. A satisfied smile formed as I began to seek out the loopholes in the Bible (my own parental admonitions and the Constitution were to be next).