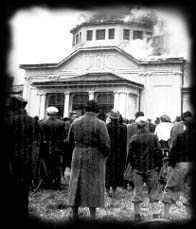 Kristallnacht. The burning of a Jewish synagogue in Nazi Germany, November 9 - 10, 1938

Good news! (Well, somewhat good.) The rash of black church burnings, which gained national prominence, turns out not to have been part of a grand conspiracy. Individuals in areas might band together, but they were not linked to groups in other communities. No national conspiracy but, still, smoldering ash heaps dotted the American landscape.

More white churches were torched than black. So tied up are we with race in this country that these church burnings were immediately seen as a racial issue. That focus by-passed a much deeper question: why churches, black or white?

Not only in America, but Norway also is facing a similar threat. There historic and magnificent stave churches--held together by sophisticated mortise-and-tendon joints that allow the buildings to adapt to changing winds and temperatures without the help of glue or nails--have survived for 800 years. But they have not withstood the arsonists' torch. In the past four years, twenty historic churches (41%) have been destroyed; twenty-nine remain.

The burnings in Norway are attributed to a homegrown Satanist movement that circulates the proclamation: "Kill the Christians. Burn their churches. Destroy their homes. Torture their children." So far, fortunately, there is evidence only of burnings.

Fortunate, also, is the absence of such visible inflammatory proclamations in this country. This does not mean that some of the same anti-Christian feeling (or anti-religious feeling since Jewish and Muslim places of worship are sometimes defaced) is absent. The overwhelming good will for religious life in this country covers small pockets of tight-lipped anger.

Fire was also used against Christians by their early enemies to destroy the new faith. Using, rather than rejecting, that object lesson, Christians themselves torched their enemies. (Actually, the Puritans, avoiding the mass hysteria of Europe in which thousands were burned, didn't burn witches [eighteen men and women were hung and one man was crushed with rocks], which is of no consolation to those who died but an interesting historical footnote.)

Better buildings than people. Yet, if buildings are torched with little concern, because that is not part of a national racial conspiracy, can people be far behind? The shift from arsonists of abortion clinics to assassins of abortionists may be a thin precedent, yet unchecked violence often escalates.

The federal government studied the rash of church burnings and decided that neither a national nor regional conspiracy exists. Their work is ended. I believe there is still a burning issue.